I've used MongoDB on a project for the City of Chicago with great success.  I was impressed with the fact that we can store JSON documents in one giant collection, scale horizontally by just adding new nodes, the plethora of language APIs (Java,AS3) that can talk to it, run MapReduce tasks, and my favorite is that you can create a true spatial index on a document property.  This is not some BTree index on a compounded x/y properties, but a true spatial index that can be used to perform spatial operation such as near and within.  Today, Mongo only supports point geometries, but I understand that they are working on storing and spatially indexing lines and polygons and enabling other spatial operations. I've experimented with great success in an intranet in consuming BSON object directly from Mongo into a Flex based application, but the direct socket connection is a problem in a web or mobile environment. In addition, what I wanted was some middle tier that can turn my BSON documents into a full fledge Flex AGS Graphic instance with as little impedance as possible. When we wrote the Flex API for ArcGIS, we annotated key classes with "RemoteClass" to enable direct AMF streaming from ArcGIS Server at the SoC level.  What that means, is that there is no impedance mismatch between the object types created on the server with the object types consumed on the client. Some of these annotated classes are, FeatureSet, Graphic, MapPoint, SpatialReference. Whenever the words middle tier and AMF are together, you have to think BlazeDS with its RemoteObject capabilities on POJO and whenever you say POJO, the SpringFramework is by far the best at handling POJOs. Lucky for me, Under the Spring Framework umbrella exist two projects that the marriage of the two will create beautiful harmony; the Spring BlazeDS Integration and the Spring Data for MongoDB.  The BlazeDS Integration will handle the exposure of annotated POJOs as remote services that can be consumed from Flex and using IoC, these POJOs are injected with MongoDB templates for data access.  In today's world, client applications have to be of mobile nature and my experiment to fuze all these entities is no exception. So, I've written a simple Flex mobile application, that declares a RemoteObject with an http based endpoint to a server side registered POJO that exposes a "near" operation. On the client, the user can tap a location on the map.  The location is an argument to the "near" server side function, that invokes on MongoDB the "near" operation on a collection of tweet documents. The found tweet documents are converted to Graphic instances and returned back to the Flex application as part of a FeatureSet. The features in the FeatureSet are assigned to the graphicProvider property of a GraphicLayer, thus rendering these features on the map.  Just for coolness, I placed a switch toggle as a map control to enable/disable the clustering of the returned features. The key glue to this fusion is the mongo mapping converter implementation that converts BSON object to AGS features.


Here is a snapshot of the application in action from my iPhone ! 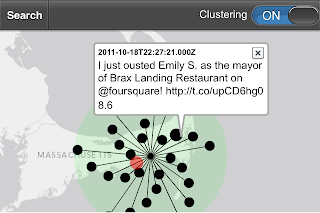 And like usual, you can download the client source code from here, and the server side code from here.
Disclosure - The current flaring does not work on mobile using the released API unless you include the mx swc :-( this has been fix for the next release (don't ask....soon :-)
Posted by Unknown at 4:01 PM